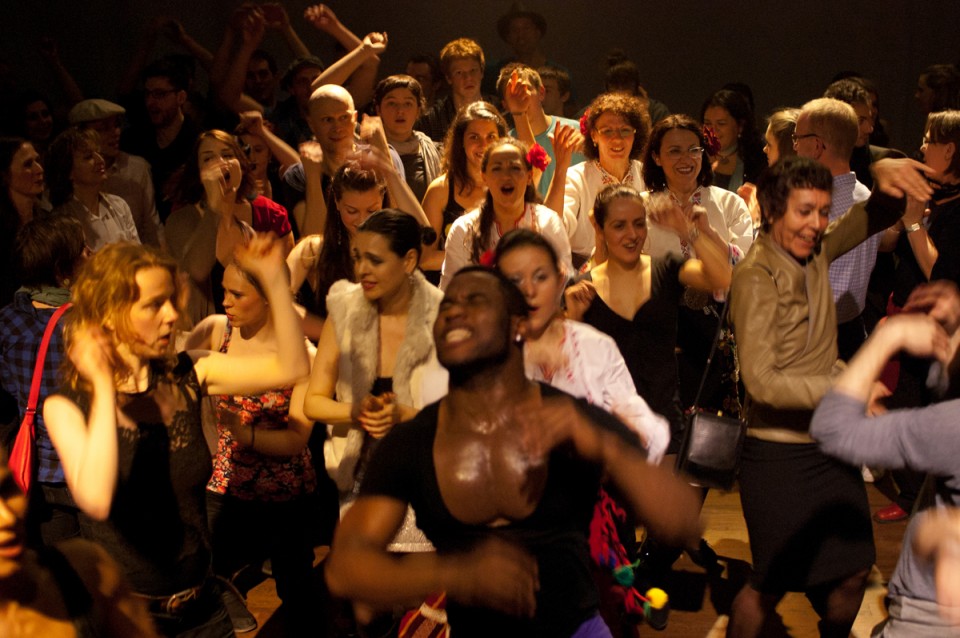 Eric-Maria Couturier was the unanimous winner of the cello music award at the Higher National Conservatoire of Paris (Cnsmdp), where he studied under Roland Pidoux (cello), Jean Moullière, Christian Ivaldi, Ami Flammer (chamber music) and Patrick Moutal (Indian music). In Italy, he won First Prize and the Romantic Music Prize at Trapani, Second Prize in Trieste and Third Prize in Florence with the pianist Laurent Wagschal. He also studied with the cellist Igor Gavrich, the singer Jorge Chamine and the piano player Marie-Françoise Bucquet. At the age of 23, he joined the Orchestre de Paris, and then became Leading Solo Cellist with the Orchestre National de Bordeaux-Aquitaine. An eclectic performer, Éric-Maria Couturier has dedicated himself to classical music and research in new modes of musical expression. He has been a member of the Ensemble intercontemprain since 2002. He has worked with visual artist and electronic performer Erikm, Jazz singer David Linx, and has performed alongside Maurizio Pollini, Pierre-Laurent Aimard, Shani Diluka, Leon Fleischer, Christian Ivaldi, and Jean-Claude Pennetier. Since 2007, he has been working with the dancer Richard Siegal. In 2008, he spent some time in Japan with the director Massa Eguchi shooting the documentary Goendama about the therapeutic power of the cello. Eric-Maria Couturier is also a member of the octet “Les violoncelles français.” He plays a Franck Ravatin 2008 cello.

Kenneth Flak was born 1975 in Kristiansand, Norway. He freelances internationally as a dancer, choreographer and composer. He has danced in the works of many choreographers including André Gingras (Netherlands/Canada), Dansdesign (Norway), Preeti Vasudevan (India/Usa) and Richard Siegal (France/Usa). He trained in the Stage Direction department of the National Academy of Dramatic Arts, Norway, along with the Mime Department and Modern Dance Department of the Amsterdam Arts School. In 2007 he received a Bessie Performer’s Award in New York for his interpretation of Gingras’ solo Cyp17; in 2010 he was nominated for the Bng Award in Amsterdam for Of Gods and Driftwood. He received the Norwegian Government Grant for Young Artists 2004 and 2008-9. He collaborates with choreographer and dancer Külli Roosna (Estonia) on a variety of projects, notably work for the Kaunas Biennial, (p)recycle (October, 2011) as well as a work for the Estonian National Ballet, Pärast maailma (After the World) and Jumalate juures (God Studies #4) in Tallinn (February, 2012). 2011 also found him working with Kaja Lindal in Estonia. Flak is a regular guest teacher at universities and professional workshops around the world. A self-taught composer, he frequently writes the music for his own choreographies, as well as those of Charlotta Öfverholm, Wilfried Seethaler, Kosmas Kosmpoulos, Yael Gaathon and others.

Caroline Geiger , born in Munich in 1974, dancer at the Ballet Academy Munich. She was engaged with the Bavarian State Ballet from 1994 to 2001. She held the first title role in Mats Ek’s modern version of Giselle. In 1999, Jean Grand-Maître created the title role for her in his ballet Emma B., inspired by Gustave Flaubert’s Madame Bovary. In 2001, she joined the Cullberg Ballet Stockholm, went on world tour with the company and danced in ballets by Mats Ek, Ohad Naharin, Jiri Kilian, Stijn Celis, Johann Inger and others. She finished her dancing career in 2004 and and has been teaching Pilates. In 2009, she took over one of the main roles in Jiri Kylians creation Zugvögel for the Bavarian State Ballet. As well as following her interest in solos and improvisation, she is continuing her work as a performer.

Yvonne Madrid initially trained at the Actors Academy in Munich until 2002. She then began working in both television and film, while also forging a second professional career as a vocal artist at the Munich Conservatory. She has been awarded several prizes both in Germany abroad and, for a myriad of roles from Italian opera to operette. She collaborates with Richard Siegal/The Bakery as part of the ©oPirates cast.

Sebastien Mari After his initial training in his hometown of La Rochelle, France at the Conservatoire national supérieur de musique et de danse, Sebastien Mari won the gold medal for dance and worked for two years with the Jeune Ballet de France.  He then spent six years as part of the Nederlands Dans Theater Ensemble in Den Haag under the direction of J. Kylian. He went on to Madrid to work with Nacho Duato and the Compania Nacional de Danza. In the last five years he has followed new challenges, companies and directors and worked with choreographers including Rui Horta, Saburo Techigawara, Regina van Berkel, Pieter de Ruiter and Giuliano Peparoni.

Francesca Mattavelli was born in 1980 near Milan, Italy. After graduating from the Teatro alla Scala she worked at the English National Ballet in London, Maggio Musicale in Florence, Balletto di Torino and with the violinist Angelo Branduardi. From 2005 to 2011 she danced for the Lyon Opera Ballet in France where she performed repertory from William Forsythe, Jiri Kylian, Mats Ek, Maguy Marin, Trisha Brown, Odile Duboc and Anne Teresa de Keersmaeker among others. She also created work with Ralph Lemon, Odile Duboc, Otto Ramstad and Olive Bieringa. Since 2011 she has been freelancing, collaborating with Richard Siegal and Otto Ramstad. She participated in Les bien Aimés, a film by Christophe Honoré, as a dancer and choreographic assistant. Alongside her career as a dancer, she attended the Bicocca University of Milan from which she holds a degree in Educational Sciences. She holds the DE (Diplome d’Etat) and she teaches dance in the Cnd (Centre National de la Danse) in Paris and at Lycée Récamier in Lyon.

An active recording artist and performer since age 12, Ms. Pato has released four solo Gaita recordings and two as a pianist. She has performed in several world premieres of pieces by Osvaldo Golijov and has collaborated in more than thirty recordings as a guest artist, including the Grammy award winner Yo-Yo Ma and Friends; Songs of Joy and Peace. or the Jazz album Miles Espanol: New Scketches of Spain.  Ms. Pato is Doctor of Musical Arts from Rutgers University and a member of Yo-Yo Ma’s Silk Road Ensemble.

Camille Revol was born in Annecy, France and began her dance training at the Conservatoire de Musique et de Danse d’Annecy. She went on to train at the Ecole-Atelier Rudra Béjart Lausanne, and the D.A.N.C.E. Programme under the direction of Wayne McGregor, William Forsythe, Angelin Preljocaj and Frédéric Flamand. During this time she performed as a guest dancer with the Forsythe Company in Human Writes, worked with Angelin Preljocaj, and danced in two new creations, Memeri by McGregor and A Success Story by Flamand, in Europe and at Sadler’s Wells in June 2007. Since then she has been dancing independently with Ivar Hagendoorn, the Avatâra Ayuso Dance Company, and Richard Siegal/The Bakery. She also studies animation film at the Atelier des Beaux Arts de Paris.

Külli Roosna, born in 1981, is an Estonian dancer, choreographer and teacher. She graduated Tallinn University in 2005 as a choreographer/dancer and continued her studies at Rotterdam Dance Academy in the Netherlands. After obtaining her second bachelor degree (2007) Külli started working internationally with different choreographers. Since 2010 she has been following the master’s program in choreography at Tallinn University. She has worked with Dylan Newcomb, Amy Raymond, Richard Siegal, Fine5 Dance Theatre, Aida Redza,  Ezequiel Sanucci, Teet Kask, Katrin Essenson and others. Currently, she is choreographing, teaching and researching in collaboration with Norwegian choreographer Kenneth Flak. Her solo performance Circle Through was awarded the First Prize at the International Festival of Modern Choreography in Vitebsk, Belarus. Külli Roosna frequently teaches contemporary dance technique and improvisation classes for Fine5 Dance Theatre, Tallinn University and various dance festivals. She has performed her own and other choreographers’ works in Japan, South Korea, Germany, England, Russia, Belarus, Sweden, Norway, Finland, Latvia, Netherlands and Estonia.

Alexeji Sagerer Born in Plattling, Niederbayern, Alexeji Sagerer was theater director and founder in 1969 of the pro T, a Munich off-theater group which he still directs. He calls his theater comical, processional theater, endless theater or spontaneous theater and was one of the first to initiate crossover projects in the fields of visual arts, music and film. Theater Heute called him the most important experimental figure of the avant-garde scene for the off and off-off (free) scene of the arts. He has been awarded numerous prizes since 1988, among them the Ernst Hoferichter Prize and in 1997, the Theatre Prize of the City of Munich.

Paula Sanchez’s dance career marked Netherlands Dance Theater for 16 years. In her tenure, she created roles with Jiri Kylian (Whereabouts Unknown, One of a Kind, Bella Figura, Arcimboldo, Claude Pascal, Last Touch, Toss of a Dice), Ohad Naharin, (Diapasson, Kammos), Saburo Teshegawara, Hans van Manen (Polish Pieces), Paul Lightfoot (Step Lightly, Shangri-la, Arcimboldo), Regina Van Berkel and André Gingras. She also performed repertory by Forsythe, Ek and Duato. Born in Madrid in 1972, Sanchez studied with Carmina Ocaña, Escuela Nacional de Danza/Mardrid, and Carmen Roche. She appeared in short films and on television with director Gracia Querejata. Her credits as a choreographer include From Hungary With Love (2000), Amber Wings (2004), Lilac Wine (2005) and Waves (2006). Since leaving Ndt, Sanchez has participated in the Dogtroep production, Locket 25, and collaborated in the creation of the 2008 premiere of Kylian-Schumaker-Kupferberg’s, Last Touch First. She danced in the 2007 premiere of Richard Siegal’s If/Then Septet, and later assisted him choreographing at The New York City Ballet and for the film, Una Hora Mas En Canarias. Sanchez has been on the faculty of American Dance Festival where she teaches improvisation. Her collaborations with Richard Siegal range from film musicals to dance productions such as ©oPirates, and performances including the Venice Biennale.

Asha Thomas (Atlanta, Georgia, Usa) received her Bachelor of Fine Arts degree from the Juilliard School in New York City where she studied ballet, modern and contemporary dance and, upon graduating in 1999, became a member of the Alvin Ailey American Dance Theater under the direction of Judith Jamison. In 2007 she moved to France where she joined the cast of the muscial theater production “Kirikou et Karaba” in Paris. She has also danced with Compagnie Moral Soul, Compagnie Salia ni Seydou, Compagnie Traces/Raphaëlle Delaunay,  and with Companía Miguel Vargas in Spain. In 2010, Asha founded a contemporary modern dance company, Compagnie Ima, and presently touring her solo “Mi Peñita Negra”.

Franck Edmond Yao Born in Abidjian, Ivory Coast, Franck Edmond Yao studied dance and theatre at the Kingbok School. He won the African Award from 2003-2006 as best African dancer in Paris, and developed choreographies for Lino Versace and Boro Sanguy (Jet Set). 2008 was his debut as Gadoukou la Star and since 2005 he has worked with Gintersdorfer/Klaßen in the following productions (2010): Lobogi 05 with Richard Siegal, Logobi 04 with Jochen Roller, Logobi 03 with Laurent Chétouane, 7% with Bernd Moss (Deutsches Theater Berlin), and Othello, c’est qui (Kampnagel Hamburg, Fft Düsseldorf).

Wolfgang Zamastil had his first cello lesson at age 5 in Salzburg, Austria, and hasn’t stopped playing since. He studied cello with W. Tachezi and C. Hagen at the Mozarteum in Salzburg, and later with M. Sanderling, then with J.P. Mainz in Berlin. He has taken master classes with Heinrich Schiff, the Ensemble Modern, the Ensemble Intercontemporain and Pierre Boulez, among others. His performance and composition works include contemporary classical music, Tango Nuevo, electronic and pop music, as well as projects with actors, dramaturges and choreographers in Austria, Berlin and New York. His solo work spans his 2005 debut in Salzburg with Schostakovitch’s 1st Cello Concert (Jps) to acclaim as a writer for children’s music books. He has had 4 CD-productions of his own compositions. 2008 marks the initiation of his own band Lab of The Halo.