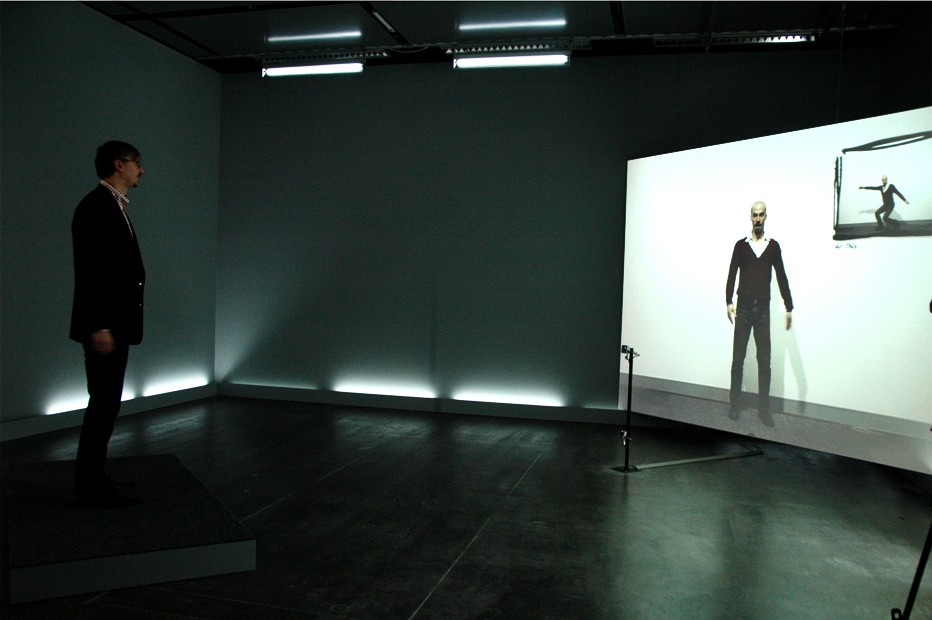 If/Then Installed is an interactive installation which places visitors in the role of the dancer. Participants are invited to perform a series of movements, imitating and virtually controlling video of dancer-choreographer Richard Siegal executing gestures derived from Yvonne Rainer’s piece Trio A.*

Participants’ movements are captured in real time. When a gesture is performed to the satisfaction of the tracking parameters, the user’s recorded image is displayed and replaces that of previous participants. Engaged in this interaction, participants have a chance to go beyond any perceived limitations they may have, and to experiment with their physical and social selves.

The user recordings serve as a model for future users and also feed an ever- evolving database of archived gestures. Through this archive, participants experience their collaborative presence as part of the overall choreographic system, and also grasp the breadth of the physical variations generated when a single gesture is performed by many different people.

If/Then Installed was built and presented for the first time at Zkm in Karlsruhe in February, 2009 and has been acquired as part of the Museum’s permanent collection.
Additional venues: Muffathalle in Munich, the Admont Monastery exhibit Play, and Centre Georges Pompidou in Paris for Videodanse 2011.

*Trio A was first performed in 1966 by Rainer, Steve Paxton and David Gordon at Judson Memorial Church, New York City. In 1968 it was performed as the first section of Rainer’s The Mind Is a Muscle.