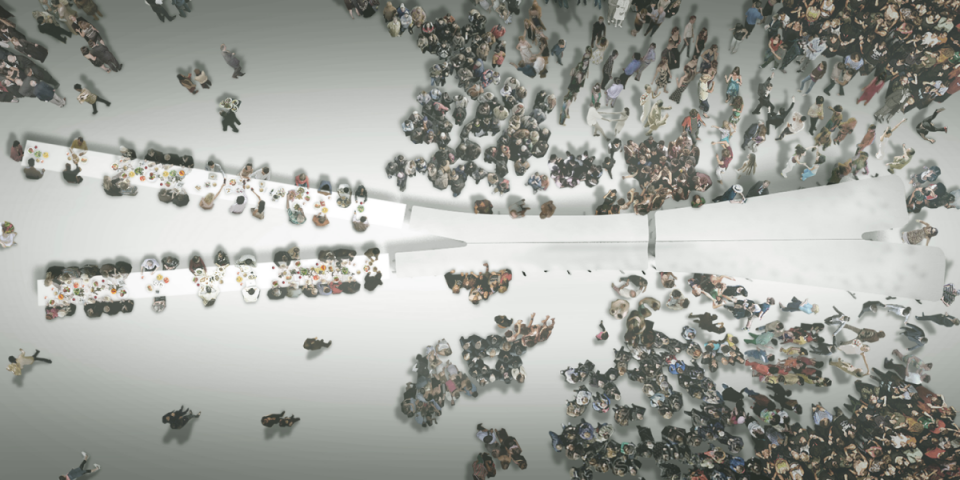 Civic Mimic explores the gathering of people in urban and public spaces, the conditions of belonging and exclusion, ownership and copia. Six individual dancers dressed in white uniform designed by Alexandra Bertaut perform the longstanding discourse on imitation.

Civic Mimic situates the body on the intersection between the individual and the collective. It enacts bodies in their social relation, frustrating the division between spectator and performer in a conditional, transactional space. Within the interdepending systems of crowd, material and gesture the performers negotiate the resulting unpredictable reciprocity.

Generated by Siegal’s choreographic strategy, If/Then Methodology, a game-based syntactical and notational system by which performers thematize the act of choice, Civic Mimic seeks to bring the public into a shared attitude of the conditional.

Architects R&Sie(n) have created an architecture of incertitude and instability which determine the spatial and physical experience of both dancers and spectators.

Composer Hubert Machnik’s composition correlates with Siegal’s choreographic process.  For Civic Mimic he has designed an instrument which, as a performer, locates him between his own composition and the temporal and spatial decisions of the dancers.

Partners: The Bakery, The Forsythe Company, Théâtre National de Chaillot (Paris), Muffathalle (Munich), Tafelhalle (Nuremberg), funded by the German Federal Cultural Foundation and the Cultural Department of the State Capitol Munich and the Bayerischer Landesverband für zeitgenössichen Tanz (Bltz) with funds provided by the Bavarian State Ministry of Sciences, Research and the Arts.